Meet the volunteer Canadian board of CMETrust (bios below) 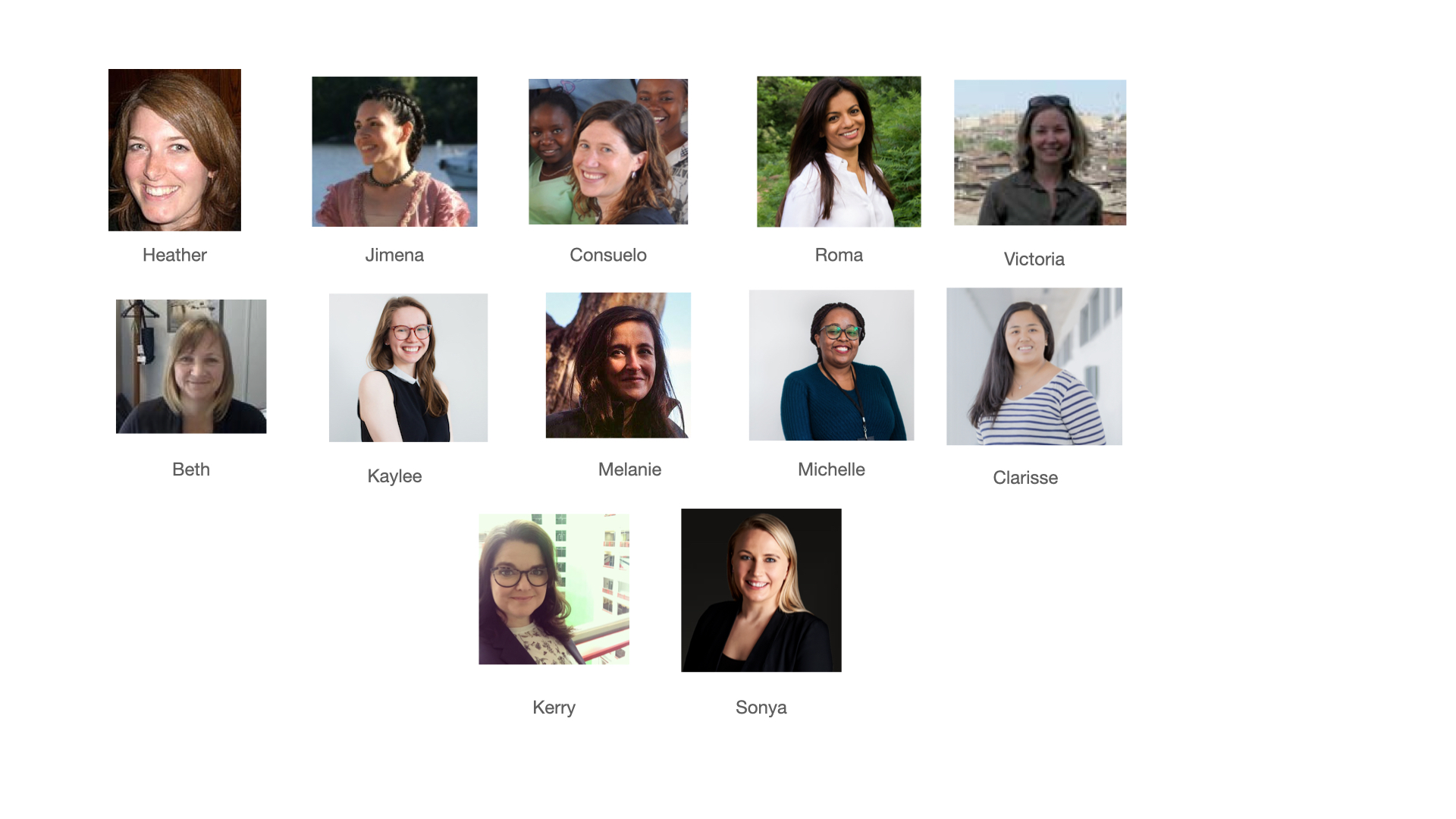 Heather Arnold is a founding member of the Board, and the President of CMETrust. She became involved in the Trust in 2006 after returning from Nairobi where she participated in a CIDA internship at the United Nations Environment Programme. She was inspired by her time in Nairobi to give back to the community there.

Heather now lives in Toronto where she works at Environment and Climate Change Canada as a Senior Policy Analyst.

Jimena became a CMETrust volunteer in 2007 and has contributed to the Ottawa chapter in several ways since then. She was elected to the Board in April 2014 and took on the Vice-President role in 2016.

Jimena is a climate change adaptation specialist with over 12 years’ experience in providing research, analysis and advice to inform policy and program decisions by the Canadian federal government. After seven years in government, she transitioned to the private sector and works with a small firm as a consultant.

Jimena is passionate about strengthening institutions as a way to help people make better, more equitable decisions. When she isn’t working on this in her day job, she pursues that passion by volunteering. Intrigued by the promise of social tipping points and cross-scale change, she recently completed a graduate diploma in social innovation at the University of Waterloo.

Victoria co-founded CMETrust in 2006 along with then Kenyan Field Representatives Benedict Kiage, Titus Kuria and Charles Omondi. She was CMETrust's President from 2006 to 2016, when she stepped down to take on the exciting role of CMETrust's 10th Anniversary Campaign Co-Chair. During Victoria's early years with the organization, she also established CMETrust's Toronto and Ottawa chapters.

Since 2006, Victoria has returned to Mathare in 2007, 2010, 2014 and in 2016 to celebrate CMETrust's 10th birthday. Victoria is thrilled to have these opportunities to meet and talk with the scholars, alumni and their families, who are always filled with such gratitude, inspire such hope, and offer such innovative ideas for ways to make our program even better.

Victoria lives in Ottawa with her partner, Jonathan, daughter, Nia, and step-daughters, Madison and Kara. Victoria works at the Canadian Food Inspection Agency as the Deputy Director of International Regulatory Cooperation. Victoria was previously employed at Fisheries and Oceans Canada, and started her career in the federal public service at Natural Resources in Canada when she returned from Kenya in 2006. Victoria enjoys being outdoor with family, dining with friends, gardening and travelling.

Beth joined the board in 2020, but has been an admirer the work of CMETrust from afar for several years.

Beth has worked in the environmental management field for over 20 years, and has specialized in climate change adaptation for most of those.  Through her various jobs at Natural Resources Canada, Global Affairs Canada and the Treasury Board Secretariat, her work has been both domestic and international.

After many years of contributing at the multilateral level through her membership on the United Nations Framework Convention on Climate Change Least Developed Countries Expert Group, and coming from a family of educators, she is now thrilled to be contributing to an organization that empowers individuals through education.

Melanie brings over a decade of international development and education experience to the board. She first visited Mathare in 2005 as an undergraduate and returned a year later to live and work in the Eastlands of Nairobi as a CIDA intern. Later, her graduate work at McGill University examined the community perception of a pilot project of the Kenyan Slum Upgrading Programme (KENSUP) and, in tandem to that research, she worked with the United Nations Human Settlements Programme (UN-Habitat) to help conduct an impact-assessment of the same project. She has also worked with the Canadian Field Studies in Africa (CFSIA) programme – providing technical and academic support in Kenya, Uganda, and Tanzania – and helped connect CMETrust to CFSIA during that time. Melanie will be formally elected to the Board in 2017.

Melanie has a strong understanding of how issues of poverty, education, and health intersect, and is committed to using her experience in East Africa and knowledge of innovative education and outreach strategies to help CMETrust grow and thrive.

Consuelo started volunteering with CMETrust in 2007 and joined the Board in 2008. Over the years Consuelo has provided leadership to CMETrust by taking on various Board and executive roles such as the Ottawa Chapter co-chair and Vice President.

In 2014, Consuelo had the opportunity to visit CMETrust operations in Mathare and met CMETrust scholars, their parents and guardians, alumni and CMETrust partners. Seeing first-hand the impact of CMETrust's efforts in helping kids and their families break the cycle of poverty through education was highly motivating and has significantly added to her enthusiasm for the important work of CMETrust!

Consuelo lives in Ottawa with her husband and two children and is a Manager in the Office of the Chief Scientist at Natural Resources Canada. She has a Master's degree in Local Economic Development (M.A.E.S) and a Bachelor degree Economics & Geography (B.Sc).

Kerry Kelly (she/her) previously volunteered for CMETrust during the Bright Futures 10th Anniversary Campaign, and had been a long time supporter of the organization.

Kerry lives in Toronto and is a communications professional who has worked at a variety of nonprofit, education and media organizations during her career. She is also a writer, and has written two published novels. Kerry holds a Bachelor of Journalism from Carleton University, and a Masters of Information from the University of Toronto.

Michelle Musindo (she/her) is currently working at the Canadian Women's Foundation as the Events and Capacity Building Coordinator for the community Initiatives Team.

Michelle has always been interested in the intersections between gender, law and development. Michelle holds a Masters in Global Affairs from the Munk School of Global Affairs and Public Policy and a Bachelor of Public Affairs and Policy Management from Arthur Kroeger College. She has experience working for think tanks and international organizations on issues of gender, policy and development, justice mechanisms, corruption and international criminal law. Michelle hopes to continue working towards equitable justice and legal mechanisms for survivors of violence around the world.Michelle M. was elected to CMETrust after being matched with the organization through the Girls on Boards program as one of 30 Young Directors aimed at increasing the representation of women-identifying, non-binary and 2-spirit folks on governance boards.

Kaylee (she/her) is a feminist passionate about accessible education and innovative public policy. Born and raised in Toronto, on the traditional territory of many diverse Indigenous peoples, Kaylee seeks to use her knowledge and skills to make the world a more equal place. She currently works in public policy and communications and spends much of her free time singing, walking, and baking.

Kaylee holds a Bachelor of Arts (Honours) from Queen’s University in Global Development and Political Studies. Kaylee has worked on community-based sexual violence response and prevention in Kingston, Ontario and is on the Youth Council of her local MP’s youth advisory panel.

Kaylee was elected to CMETrust after being matched with the organization through the Girls on Boards program as one of 30 Young Directors aimed at increasing the representation of women-identifying, non-binary and 2-spirit folks on governance boards.